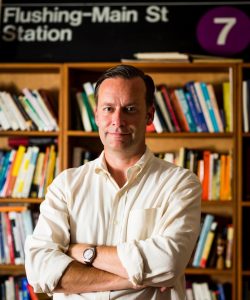 R. Scott Hanson, Ph.D. (University of Chicago), has spent most of his adult life thinking about diversity and pluralism in America and the world, but much of it has focused on the neighborhood of Flushing, Queens in New York City. He received his B.A. in 1992 from the Plan II Liberal Arts Honors Program at the University of Texas at Austin, where he doubled majored in English Honors and concentrated in American literature, critical theory and creative writing. He then moved to New York City to begin an M.A. in Religion at Columbia University, where he started to focus on the intersection of American religious history and immigration. He began work as a researcher in New York City for Diana Eck’s Pluralism Project at Harvard University in 1994 after completing his M.A. He did much of the fieldwork in New York for the multimedia CD-ROM On Common Ground: World Religions in America, covering the Hindu, Sikh, Jain, Tibetan, Sri Lankan, Thai Buddhist, and some Muslim communities. He now serves as an Advisor to the Pluralism Project. His research in Queens ultimately led to a focus on the history and extreme case of religious pluralism in modern Flushing that he explored more fully as a doctoral student in the Committee on the History of Culture at the University of Chicago.

His first book, City of Gods: Religious Freedom, Immigration, and Pluralism in Flushing, Queens, was published in July 2016 by Fordham University Press and their Empire State Editions imprint. A second printing was released in May 2017. City of Gods received a Starred Review from Publishers Weekly, which said it is an “[an] intimate portrait of lived religion… inspiring… deserves a place alongside Robert Orsi’s The Madonna of 115th Street.” It was also featured in a full-page story in the Sunday Book Review of The New York Times, which called it a “minutely detailed… case study of the promises and drawbacks of pluralism.” America: The Jesuit Review said it is “a timely book because it provides a framework for understanding current controversies over immigration.” A review in the journal of Ethnic and Racial Studies called it “outstanding,” the Journal of American Ethnic History said it is “exhaustively researched and compellingly written,” and the Journal of Urban History called it “a hopeful narrative… [and] rich community study.”

After receiving his Ph.D. from Chicago, Dr. Hanson worked as a postdoctoral research associate at Brown University, and he has taught at Philadelphia University, Binghamton University-SUNY, Delaware Valley College, Temple University, and the University of Pennsylvania. He is currently a Lecturer in History, Director of the Social Justice Research Academy  and Associate Director in the Office of Social Equity and Community at the University of Pennsylvania and an Adjunct Associate Professor in History and American Studies at Temple University. A noted expert on pluralism in America, he has been interviewed for several newspapers, radio programs and on TV, and he also contributes occasional columns for newspapers and magazines, gives public lectures, and enjoys working with museums. He lives in Philadelphia with two wonderful sons and a dog.